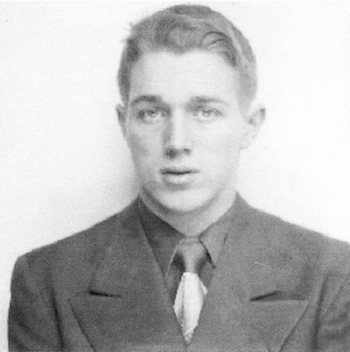 We are pleased to announce the Newton R. Disney Service Award. This award is given to an individual who by his or her actions and dedication to the mission of Church Farm School has served the school and its students in a significant and committed manner. This individual would have provided the service humbly and to the best of their ability without expectation of recognition or reward but with only the wish that in some way they might give back and make a difference in the life of a young man.


Newton "Diz" Disney was a 1948 graduate of Church Farm School. Born in York, PA, Newt spent his formative years at Church Farm School, an all-around athlete who played basketball, football and competed in track and field. He returned to campus in 1957 to coach basketball and led the team to back-to-back KSAC championships in 61-62 and 62-63. He was also a nurse anesthetist for more than 40 years and a successful hospital administrator. As a community member, he gave of his time, energy and fortune without reservation or expectation of reward to organizations he believed in: the AANA, the Boy Scouts of America/Troop 211, St. Phillips in the Hills Episcopal Church and Church Farm School. Newt passed away on Sept. 24, 2013 from complications from Parkinson's disease.

Nominations are open through March 1. To nominate an individual you believe has shown an amazing commitment to Church Farm School, please either:
Notes:

A fund has been created to help defray expenses associated with the award (recipient travel costs, award costs, etc.)? If you would like to contribute to this fund in memory of Newt Disney, click here to donate, and note "Disney Award" in the Comments field.
PAST RECIPIENTS

Church Farm School | |
Phone: 610.363.7500 | Fax: 610.363.5367 | Admissions: admissions@etiennekuypers.com
The Church Farm School is an independent boarding and day school for boys in grades 9-12 located in Exton, PA. Founded in 1918 to provide an excellent education to young men from limited means, Church Farm School now serves boys from a range of socio-economic circumstances who are seeking an extraordinary educational opportunity. The school offers a challenging college preparatory curriculum and an exceptional level of personal attention, with class sizes averaging between just 7 and 12 students.